Duration of the exhibition until January 27, 2018 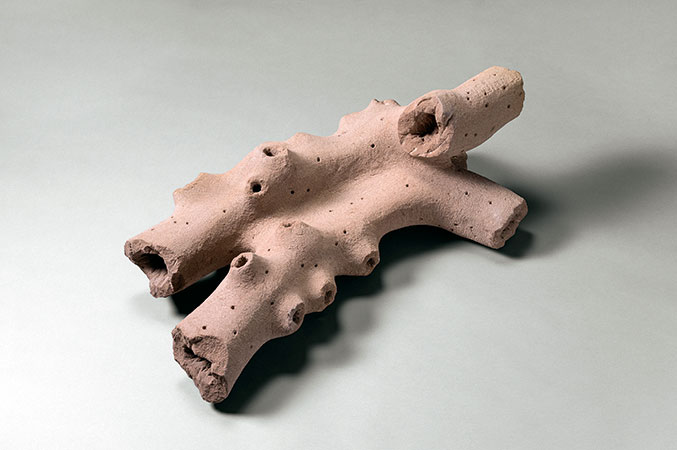 The stones of Swiss sculptor PETER KAMM (*1958) and the paintings of French artist CHRISTOPHE BOURSAULT (*1975) have already been exhibited together in our gallery as early as 2014 on occasion of the second part of our anniversary exhibition ‘Tillykke med Fødselsdagen‘ – a tribute by contemporary artists to ASGER JORN.
Stone constructions by PETER KAMM may at first sight be reminiscent of toppled and hollowed out tree trunks. They certainly remind us of something left in its natural state. But when taking a closer look it becomes clear that a lot of hard physical work was involved here. PETER KAMM starts out from big blocks, projecting his “constructions“ right into the stone. He chooses the relatively soft and coarse sandstone because of its 'unspectacular' and 'cheap' quality, 'devoid of hierarchy', as he puts it. PETER KAMM also prefers the horizontal alignment of the sculpture in sharp contrast to the aloof and presumptuous character of statues built for eternity. Similarly, CHRISTOPHE BOURSAULT's way of painting could be described as 'devoid of hierarchy', or even disrespectful. But in stark contrast to PETER KAMM, who avoids the figurative, the Marseille painter and performance artist BOURSAULT focuses on the figure itself. “Swiftly and spontaneously he throws the colours onto the canvas, roughly constructed forms result in a face, according to the motto 'dot, dot, comma, dash'“, as Selima Niggl puts it in our catalogue ‘Tillykke med Fødselsdagen‘. Julie Higonnet, on her part, speaks of a “raw, direct, electrifying, but also playful way of painting which deliberately conceals the message and impedes interpretation.“
Karlsruhe-based artist, curator and art mediator AXEL HEIL has been in contact with PETER KAMM for many years, closely following his works and making them accessible to us. He is also very familiar with BOURSAULT's paintings. We are very much looking forward to his introductory words.