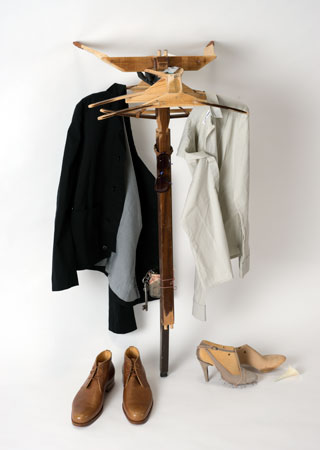 When sculptor POMONA ZIPSER took part in a symposium hosted by Heiko Herrmann in Pertolzhofen in 2014 she noticed that a bedside table was missing in her guest room. This incident served as a sudden inspiration for her to create the new and unusual series of works "STUMME DIENER. Furniture for special people and guests." Ignoring the dogmatic lack of functionality in the fine arts without fully committing herself to the function-oriented approach of applied arts was a welcome challenge for the Berlin-based artist. Just as with her "usual" sculptures she mainly resorts to using materials she had picked up somewhere and focuses on the interconnections between the single components, as, in this case, between the "pieces of furniture". That is why she has to constantly balance her own aesthetic demands and the practical functions her works should ultimately fulfill.
The term "Stumme Diener" originally stands for clothes racks on which garments, particularly men's suits, may be hung in order to keep their shape for the next day. With Zipser, however, they are designed for both ladies and men and offer many more functions than their namesakes. These new possibilities are demonstrated by fashion designer Michael Wagner and shoemaker Lotte Post, who are a part of this crossover between fashion and design during the Open Art weekend from the 9th to the 11th of September. Here they will present selected works and transitional productions. Both are Munich residents and well-known for their clear-cut, elegant patterns and forms which reveal their characteristics mostly through their details.

LOTTE POST studied fashion design at the University of Arts in Vienna before she specialized in footwear design learning the craft from Andreas Kudweis, one of Vienna's most prestigious shoemakers. In 2013 she opened her own shoemaker's workshop in Munich in the former premises of a cobbler's shop in the trendy Glockenbachviertel neighborhood where she manufactures custom-made shoes. After his apprenticeship as a tailor