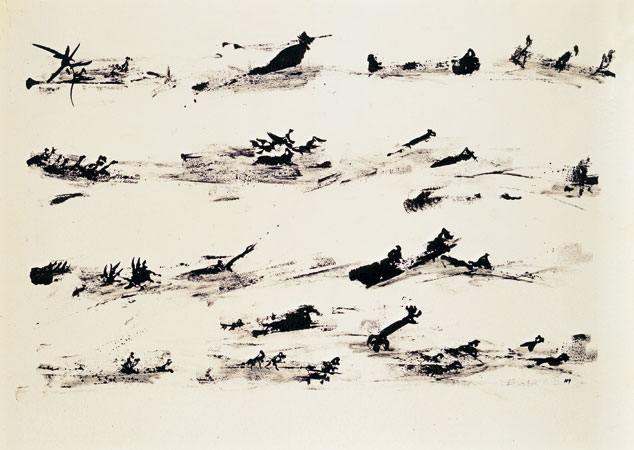 We wish you all the best, happiness and health for the New Year 2016. This year will be full of new projects, featuring among others Heino Naujoks, Christophe Boursault and Pomona Zipser, who will present her current extraordinary group of works STUMME DIENER (dumb waiters) in a temporary cooperation with fashion designer Michael Wagner and shoemaker Lotte Post on occasion of the OPEN Art 2016.

But let us start with our current exhibition featuring HENRI MICHAUX (1899–1984). In 1963 Otto van de Loo presented the first solo exhibition of the Belgian-French artist in Germany. In this phase - he was already more than 60 years old – Michaux managed to establish himself as an artist of international renown presenting his works at the Venice Biennale (1960) and at the Documenta in Kassel (1959/1964). Major solo exhibitions were launched in the Museum Jorn, Silkeborg (1962), in Amsterdam‘s Stedelijk-Museum (1964) and in the Musée National d‘Art Modern de Paris (1965). Since then Michaux has been a constant exhibitor in Galerie van de Loo and still plays an important role in the gallery‘s collection of art. On the occasion of the current exhibition a small publication will be released documenting the gallery‘s Michaux-collection in words and images. It includes ink drawings and watercolors on paper from various groups of works from the 1959 to 1975 period as well as an oil painting dating from 1982. Michaux himself, however, was interested in flexible boundaries and tried to avoid all too strong chronological distinctions by hardly ever dating his artworks and by repeatedly falling back on his old techniques and methods of visualization. This deliberate process of obliterating and obscuring also characterizes his texts, which Michaux considered a form of expression equivalent to his pictorial work. And so he did not only answer in riddles but stated more precisely: “Is there really any need for an explanation? Don‘t you see that I paint to ignore words to suppress the nagging questions of How and Why? Maybe because I clearly see this or that, the things I paint, in front of me? Not at all. Quite the opposite. I draw in order to constantly surprise myself. And if I fall into traps – even better. I‘m after the unexpected; if I knew a thing, I‘d be bored.“ (exhibition catalog Galerie van de Loo 1963)