HELMUT STURM
THE GROUP AS A DISRUPTIVE FACTOR 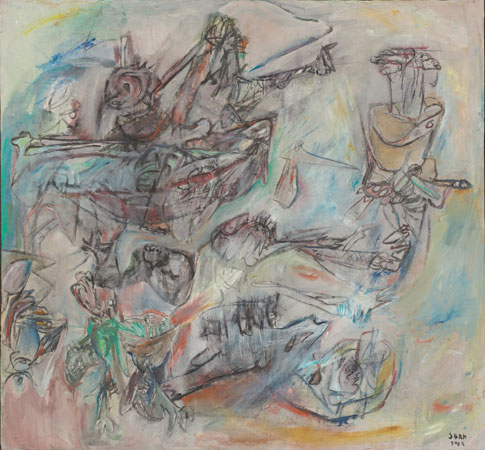 Closely linked to all this was the painter Helmut Sturm (1932-2008), who would have celebrated his 85th birthday in 2017. For him, as a member of the SITUATIONISTISCHE INTERNATIONALE, as one of the founders of the artist groups SPUR, GEFLECHT and KOLLEKTIV HERZOGSTRASSE and finally as the initiator of the KINDERFORUM VAN DE LOO, the outbreak of the confinement of his studio was an important driving force. The group – he said in 1979 – acted both as a productive and disruptive factor. We would like to present Sturm‘s art in this context. For this purpose not only his original works, but also magazines, photographs, film material and other documents including an installation of archive material by the Hamburg based artist FELIX BOEKAMP (*1977) are brought into play here. From a contemporary artistic point of view, Boekamp is intrigued by the vision of a playful society. In this context he has recently studied the Belgian artist Constant, a former member of the SITUATIONISTISCHE INTERNATIONALE. The playful element was also an important factor for Sturm and his colleagues of SPUR, GEFLECHT and KOLLEKTIV HERZOGSTRASSE, not only on a cultural political level, but also more specifically with regards to their artistic strategies.

For several years now these strategies have been research material for the internationally active art historian Dr. Jacopo Galimberti (*1981) whose new book INDIVIDUALS AGAINST INDIVIDUALISM. ART COLLECTIVES IN WESTERN EUROPE (1956-1969) has recently been published by Liverpool University Press and makes the art of the groups SPUR, WIR and GEFLECHT accessible to a non-German speaking public. On Friday, October 13, 2017, at 7 p.m., as a part of our exhibtion, Galimberti will give a lecture on the Détournements (misappropriations) of the group SPUR in the period between 1959 and 1961 and will present his new book on this occasion.