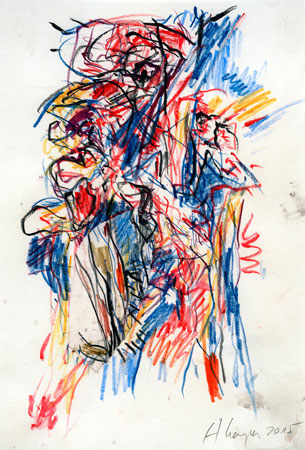 Munich-based painter HEINO NAUJOKS has drawn a lot during the last few months creating a comprehensive bundle of small-format, concentrated works on paper, which he himself considers a new stage of his artistic career. In his eyes they are landmarks, creative results that are not static but give proof of motion and movement. And the fact that they stay in motion even after completion of the actual drawing process becomes evident when we look at his drawings again and again. Each time another, different aspect comes to the fore and the hint of a new figuration stands out against the dense undergrowth of lines. Just like a kaleidoscope these works allow for many varied perspectives. In parallel to this group of works, Naujoks has created several sketchbooks which reveal more than just the search for his ultimately chosen path. Again, we are dealing with “creative results“ - dense and in motion at the same time. In their quick succession they emphasize once more the kaleidoscopic character of these works.

On occasion of our exhibition, which for the first time almost entirely focuses on Naujok's graphic work, a FAKSIMILE of the first sketchbook of this series of drawings will be published in a limited edition personally titled by the artist himself.
At the end of November DR. ANDREA HEESEMANN, who has been following Heino Naujok's work for many years and has written many well-informed essays on the artist, will introduce into his new body of works.

On Friday, October 28 from 6 p.m. and on Saturday, October 29 from 11 a.m. to 6 p.m. Munich's galleries will invite the art audience to various exhibitions, events and guided tours on occasion of the first-ever PLATEAU münchen, which takes place in parallel to the International Art Fair in Munich's Residenz – and we would like to invite you to enjoy an APER(T)O in our gallery.