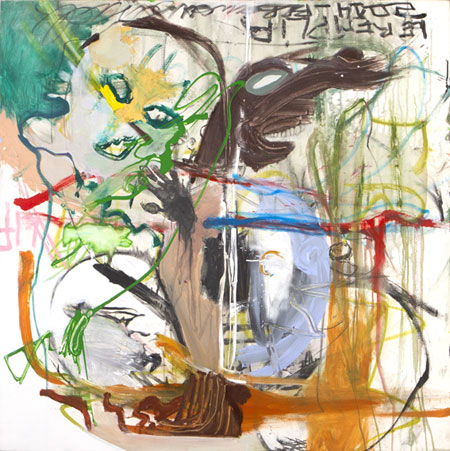 “FAR FROM FrAME“ is where the Marseille based painter and performance artist CHRISTOPHE BOURSAULT (*1975) sees his works trying to break up customary structures in more than one way. But he still stays within a certain anticlassical tendency which had already emancipated itself from classical traditions. It had been established as a form of expression that no longer inextricably linked beauty to the sublime, the divine, the one and all. The objective character of categories like “beautiful“ and “ugly“ was challenged. Artists discovered indigenous cultures and their forms of expression. The artistic efforts of amateurs, children and people with mental or physical handicaps became a source of inspiration. New work techniques were applied to either eliminate consciousness as a sophisticated corrective or to increase it in order to consciously counteract “good taste“. In this context Primitivism, Art Brut, Camp and Bad Painting are common slogans in recent art history. Boursault knows that his claim of ignoring all boundaries is both naive and even somewhat presumptuous. So he undermines this statement with his characteristic irony. Still, “FAR FROM F...AME“ is not the outcry of an underestimated genius wallowing in self-pity. It is the lively comment of an artist who plausibly presents his “freedom to failure“ as a sumptuous playground; as a space for a certain kind of sincerity that neither excludes the ridiculous nor laughter, neither nonsense nor absurdity.

After several of his works had already been presented in two exhibitions (GASTSPIEL PARIS MUNICH, 2011 and TILLYKKE MED FØDSELSDAGEN, ASGER JORN!, 2014), we are now very glad to present the artists first solo exhibition in Germany.

A comprehensive, retrospective catalog will be published towards the end of this exhibition.