CABRIO with HEIKE PILLEMANN and ERNST HECKELMANN
Opening reception on Thursday, 12th of November, from 6 p.m.

Hidden in the seemingly irrelevant are signposts to exciting new territory.
Heike Pillemann

I want people to see the love I feel for the object I paint.
Ernst Heckelmann 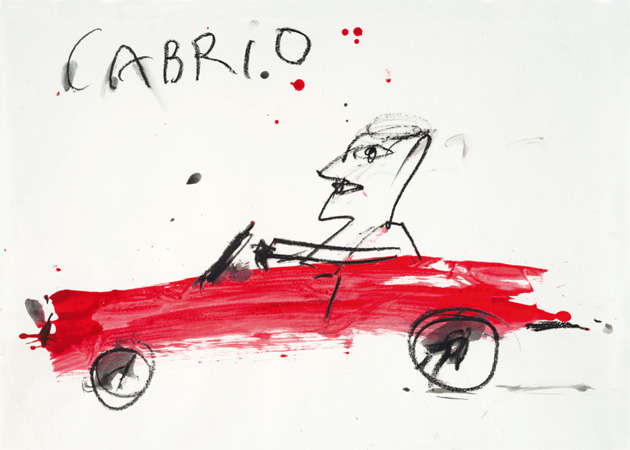 Unlike in our exhibition series Rencontre, Heike Pillemann has chosen here a like-minded contemporary rather than a counterpart. What Heike Pillemann and Ernst Heckelmann have in common is not only a longstanding friendship between artists that has already led to various artistic cooperations, but rather their very special, candid view to the things surrounding them.

One of the basic ideas for the current exhibition project - a venture difficult to calculate - was to visualize this view in the gallery, a view that focuses on the banal, seemingly irrelevant, absurdly beautiful details of everyday life. The first impression one gets when visiting the studios of Heike Pillemann and Ernst Heckelmann can hardly be reproduced anywhere else, let alone in a neutral exhibition space, without appearing far fetched at best. A reenactment was therefore out of the question. Both artists' studios are full of many small things, cards, slips of paper, clippings, commentaries etc. These partly consist of self-designed impulses and partly of collected material, which acquire a new meaning through the way they are selected. A lot of it has been diverted by the hand of the artist and often humorously been transferred into another context. There is never a direct connection between this equally furious and fleet-footed cosmos and the works of art as we finally see them properly framed on the wall. What arises is rather an associative network of artistic inspirations suggesting that both artists have a similar approach, which is perhaps not directly obvious when looking at their works individually. While Heike Pillemann puts the insignificant topics of life on paper in a figurative way, Ernst Heckelmann prefers to draw attention to the great romanticized places of longing such as palm trees, mountain scenery, swans or much loved cuddly toys in an expressive and visually stunning way.
What both artists have in common is their way of combining seriousness and open-mindedness and of not only tolerating but actually looking for the unheard-of. As failure is seen as an opportunity rather than a Damocles sword, this quest does not feel like a tour de force, but more like a speedy, unpredictable mutual trip in a convertible.