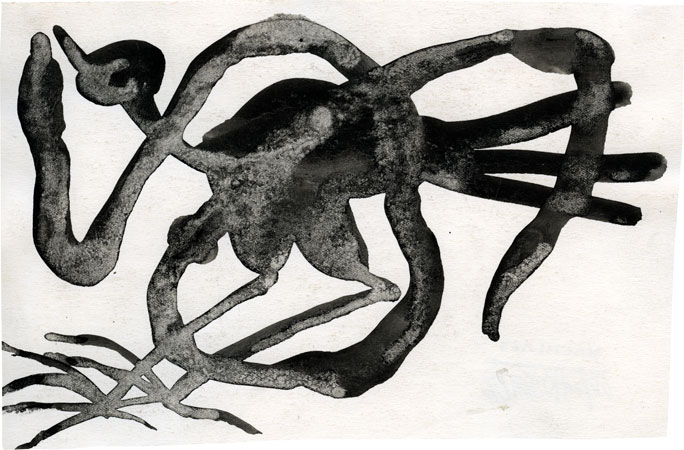 In the final three years of his life, physically already heavily challenged due to illness, Alfred Kremer (1895 in Regensburg – 1965 in Weilheim i. OB) created a vast oeuvre of small-sized pen and ink drawings so intense, they go way beyond the constraints of this format. Completely detached from his previous work as well as from contemporary artistic movements, he managed “to enter new dimensions“ (Andreas Franzke) by creating a radically reduced, unprecedented visual language.

Such independence also characterises the artistic work of Maryan (1927 in Nowy Sacz – 1977 in New York City), Helmut Rieger (1931 in Neisse/Upper Silesia – 2014 in Munich), Hans-Matthäus Bachmayer (1940 in Bayersoien – 2013 in Munich) and Michel Nedjar (*1947 near Paris). Most of the aforementioned artists have entirely different temporal, geographical and stylistic backgrounds. Still, a strong affinity between them can be intuitively sensed. When searching more closely for the cause of this intuition, a central common ground emerges: for each of these artists the human being is the principal topic of artistic discussion. What is central to the discourse is not the narrative reflection of man, but the – at times painful – penetration of their animal, erotic-obsessive and destructive substantiality. The formal resorting to archaic forms of expression (e.g. the mask) is more than just a functional instrument. The content as well directly implies the search for these archetypes of existence. Jean Dubuffet has included works of Michel Nedjar in his Art Brut collection. Even without stretching the frame of the concept too much, one could also subsume the other positions under this category.